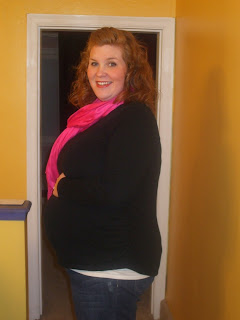 How far along? 32 weeks
Total weight gain: 29 and holding steady
Maternity clothes? definitely necessary
Sleep: Yep, usually asleep by 9:00 or 9:30 at the latest
Best moment this week: Seeing how beautiful our maternity pictures are. There are so many great ones to choose from, I have no idea how we'll decide.
Food Cravings: Jimmy Johns!! A #16 with sprouts instead of lettuce really makes my skirt fly up. I may have had the same sandwich 3 times this week, but who's counting.
Movement: I love this part the most. I try to figure out what she's doing in there but it's still mostly a mystery to me. It feels more like dancing than kicking/punching.
Gender: GIRL!!
Labor Signs: Nope.
What I miss: Nothing. I couldn't be happier right where I am.
What I am looking forward to: There's so much excitement in the next couple of months: our babymoon anniversary weekend trip, my birthday, March Madness, a BABY, starting our huge garden, staying home, etc. etc.
Weekly Wisdom: You cannot make everyone happy, be the good guy/gal, be fair, follow the rules, and keep yourself from going crazy all at the same time. It's just not possible and the stress far exceeds the rewards. I'm in the middle of a trying work situation and things are very messy and I'm trying to keep my cool.
Milestones: Things are starting to feel more serious. Next week is February, so that means that soon we can say our sweetie will be here next month. People are asking less "when are you due" and how are things going type of questions, but more "how much longer" and are you getting excited/anxious type questions. All of a sudden people are actually realizing that we're really going to have a baby soon and all of this belly growing stuff isn't just happenstance. I think we may be in the same boat sometimes :-)

Posted by Melissa at 8:37 AM No comments: 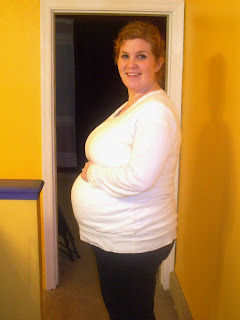 (I look tired. I know.)
How far along? 31 weeks
Total weight gain: 29
Maternity clothes? definitely necessary
Sleep: I'll take as much as I can get
Best moment this week: Nate reading her "God Gave Us You" before bed and feeling her wiggle around listening to her dad's voice. This tops my list of all-time sweet moments.
Food Cravings: nothing in particular
Movement: more rolling and squirming now than kicks and punches - especially at night after 8 or so
Gender: GIRL!! We have so much pink and purple stuff now that I'm glad we got confirmation 3 times!
Labor Signs: Nothing serious. I am starting to have a few Braxton Hicks contractions, but it's mostly when I'm a little too active. Once I slow down and drink some water they go away.
What I miss: Nothing. I couldn't be happier right where I am.
What I am looking forward to: Seeing the pictures from our maternity photo shoot on Monday.
Weekly Wisdom: Keep on truckin'
Milestones: The big exciting weekend that I've been looking forward to for so long is over. Now it's time to start organizing and getting our house ready for a baby!
Posted by Melissa at 11:03 AM No comments: 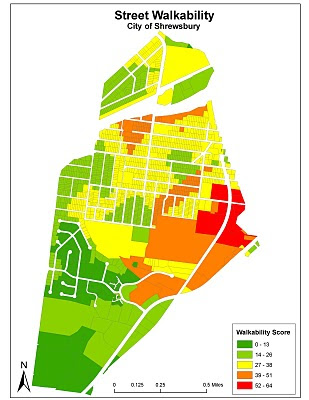 Warning: no baby updates. In my small amount of spare time recently, I created this map measuring how walkable different parts of our city of Shrewsbury are. It turned out to be somewhat less walkable then I expected, mostly because there is only one private school in Shrewsbury and because the train tracks make it longer to walk to the Dierberg's retail complex.
This was inspired by the trademarked Walk Score (http://www.walkscore.com/) developed by FrontSeat. I looked through the methodology on their website and found some room for improvement.This works by finding places that most people travel to (stores, schools, restaurants, etc.) and measuring the distance between your home and the destination. The more places within walking distance of your house, the higher your Walk Score is.
The results, which are pulled from an online yellowpages, aren't all accurate. For example, it classified the seminary next to our house as a school and a restaurant which may be technically correct but probably doesn't matter to most people. Also, each destination is given the same weight, you get just as many points for being near a coffeehouse as you do for being near a school or department store. The other big issue is that the Walk Score measures the distance as a straight line, regardless of how you actually travel to get there. So if streets don't connect, or if there is a fence or lake between you and the destination, it expects you to walk through it.
I tried to improve this methodology by concentrating on a small, familiar area which allowed me to verify all of the destinations. Also, I created my own scoring system which gives more weight to places that (I think) people care more about being close to. In addition, to take into consideration how walkable an area is, not just the distance, I took into consideration whether or not each street had sidewalks. For streets with no sidewalks, (determined from aerial imagery) I calculated an extra 30% distance that you have to walk because people are less likely to walk that route if there are no sidewalks. 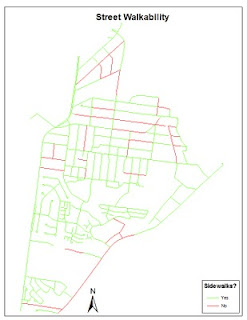 My final improvement was to use distance traveled over the street network instead of straight-line distance. GIS software allows you to create areas representing the distance from a point over a network. 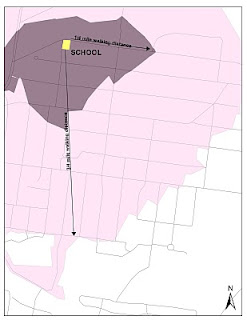 Walkability Point System: 1/4 mile or less (1/4 to 3/4 mile)
Total Possible Points = 100
School: 14 (7)
Grocery: 22 (11)
Park: 10 (5)
Department store: 16 (8)
Bus stop: 4 (2)
MetroLink station: 14 (7)
Restaurant: 16 (8)
Bar: 4 (2)
I then added laid the distance to each destination over a map of all properties in Shrewsbury. Each property which overlapped with a distance-to-destination shape (see above pic) recieved points for that category. I then added up all the points for each property and colored them according to their score.
Posted by nathantenholder@hotmail.com at 2:54 PM 1 comment:

As of this morning's appointment with my OB, baby girl has turned and is now head down! I had all kinds of questions to ask about breech babies and now I'm praying it will not be an issue. Everything else is looking great - thank God!
Posted by Melissa at 11:54 AM 1 comment: 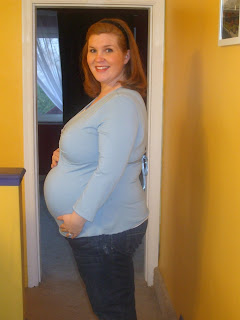 How far along? 30 weeks
Total weight gain: in the high 20s, depending on the day
Maternity clothes? definitely necessary
Sleep: Yes please!
Best moment this week: Too many to count. I felt so loved, spoiled, and overwhelmed all weekend by the generosity and wonderfulness of my friends and family. I still cannot believe all of the events this weekend were in honor of this baby girl. She is loved by so many already and we are unbelievably blessed to have so many people share in celebrating with us.
Food Cravings: My friends had just about everything for me this weekend I love - Switzer's licorice, bagels & cream cheese, cupcakes, bean dip, chocolate cherry trifle, caramel cashew bars, and italian chicken. That's a lot of my favorite food!
Movement: Earlier this week she bumped Nate so hard while he had his hand on my belly he said it felt like she head butted him! I guess that's a YES.
Gender: GIRL!!
Labor Signs: NONE. I hope to answer this question that way until at least March 4th.
What I miss: Being able to get up from the floor or a comfortable chair without help.
What I am looking forward to: Organizing her room now that we have so many wonderful gifts to put away and all of the furniture is here.
Weekly Wisdom: It's ok to cry, especially for happy reasons.
Milestones: 30 weeks! When people ask when she's due, saying 10 weeks does not seem like long at all.
Posted by Melissa at 10:45 AM No comments: 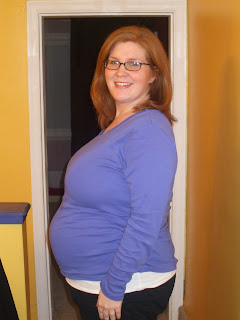 (picture taken at 30 weeks minus 3 hours, whoops! Just barely squeaking in for 29 weeks and mom is already looking tired.)
How far along? 29 weeks
Total weight gain: 25ish pounds
Maternity clothes? definitely necessary
Sleep: Love it, especially this week since I've been running low on energy for some reason
Best moment this week: Seeing her at the doctor's office, even though she's still breech we have until 36 weeks before we should get too worried. Also, Nate has been feeling her more and it's so sweet to see his face when she moves! He had his hand around my waist (ha - waist!) while I was sleeping and felt some movement and can't believe all of that happens and I can still sleep.
Food Cravings: cheeseburgers
Movement: yep, but not a lot before 10 AM. She is a sleeper!
Gender: GIRL!!
Labor Signs: NONE. I hope to answer this question that way until at least March 4th. I'll be full-term (37 weeks) in less than two months, wow.
Belly Button in or out? In.
What I miss: sleeping on my stomach
What I am looking forward to: The excitement of next weekend - 2 baby showers and a maternity photo shoot over a 3-day weekend!
Weekly Wisdom: Don't give major energy to minor people. The only major person is God! (Thanks to Pastor Haynes on the Rickey Smiley morning show for that wisdom)
Milestones: Passed the gestational diabetes test by a landslide, hallelujah!
Posted by Melissa at 9:06 AM No comments: